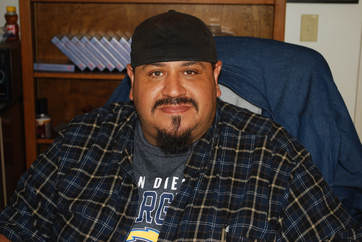 
Today, Johnny Rodriguez is Johnny Everything, a term he decidedly does not embrace.
“It’s a team effort all the way,” he says.
And he is right. Sunny Acres is a non-profit organization that is organized as hell. It works, and it works because the people who live there all pitch in and make it work. There is a lot of detail involved with 40 men -- ex-offenders; people in recovery; homeless -- living and working together in a sober living facility. If Sunny Acres is a team, Johnny is the current head coach.
Johnny shows unabashed affection for “my guys,” the men who live and work at Sunny Acres.
“These are good people,” Johnny says. “Like many of us, they have lost something, or lost their way, or done something wrong. Who hasn’t? But they want to be part of something. They are just looking for a place to call home, just like everybody.”
When you talk to Johnny today, he comes across as a calm, measured, professional manager of a medium-sized company. He explains his day-to-day routine:
“A typical day is funny because there is no such thing! I deal with other people's issues on a daily basis. They can range from from a relapse -- an extremely serious issue, with extremely serious consequences here - to two men not agreeing on what to watch on tv. That can also be a serious issue if you are one of those two men. I try to look all 40 residents in their eyes daily and check in with them and assist them with anything I can.”
Johnny’s immediate plans are to continue studies at Cuesta College in September, en route to a degree in Addiction Studies, then on to bachelor and master degrees. His goal is to be a licensed addiction counselor.
When he talks about getting those degrees, Johnny seems not to be the badass ex-convict, former gang member, but a wide-eyed, soon-to-be college freshman, excited with goals and dreams.
Today, Johnny Rodriguez seems at peace, with himself, with his life. It appears he can handle -- thrive -- living life on life’s terms.
“I think that my brother is helping me get through this life,” Johnny says.
Johnny lives with Brenda, the woman who saw the real Johnny when he did not, and his mother, the one who has loved him since birth, and the woman who really showed him how to cook. In his downtime, Johnny loves to barbecue and watch movies at home with mom and Brenda.
“The best life is the simple life.”