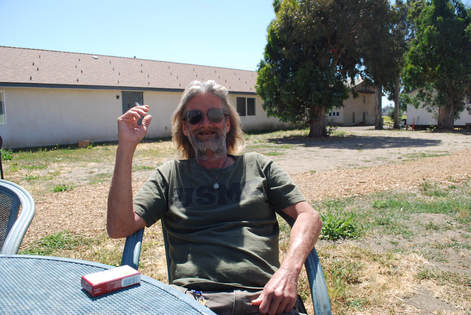 Lester Rush, house manager of Sunny Acres, seems to be everywhere.
Here’s Lester handling the laundry for the house. There’s Lester checking rooms. And there is Lester mediating a verbal disagreement between two other men at Sunny Acres.
Lester, with a bounce in his step and gleam in his eye, seems to get a kick out of all of it.
Lester Rush was born in Indiana 56 years ago. One of six children, he describes his childhood as “Hell raising.”
In between raising hell, as a young adult, Lester worked in steel mills and was a mover.  In 1989, he hitchhiked to San Diego, California, leaving the long, cold Indiana winters behind.
Lester worked in San Diego-area steel yards for a few years after arriving in California. He got divorced, depressed, and found living in San Diego miserable.  A friend told Lester he’d “love” Santa Barbara, and he went up the coast for a new start in California.
In Santa Barbara, Lester, a dog lover, quickly got a job at the Dog Adoption and Welfare Group (DAWG) as the organization’s first paid kennel attendant.  He was there for about eight months, before leaving to work for a privately-owned animal hospital. This was in the year 2000.
Lester worked at the animal hospital for 10 years. The first five were for the private ownership. After five years, Veterinary Centers of America (VCA) bought out the private animal hospital and continued operating the facility as an animal hospital. Lester worked for the VCA animal hospital for another five years. From 2000 to 2010 he held a job working in one animal hospital in Santa Barbara.
Recalling why he left the VCA position, Lester says dryly, “Me and corporate America did not get along.”
During the time he was working at the animal hospital, Lester was homeless. Although he was netting almost two grand a month, he was not able to secure housing.  “I don’t have the best references,” Lester says matter-of-factly today. “I lived in a [homeless] camp.”
He also drank a lot, especially after leaving the job at the animal hospital. In 2011, Lester had a mental breakdown, the anger, anxiety, and alcohol caught up with him. He lived on the streets. He fought frequently. He got arrested… a lot. “I lost track at 50 [arrests],” Lester says today.
Lester got locked up for all kinds of reasons, public intoxication, disorderly conduct, fighting. Alcohol had to do with all of his legal entanglements. “I’m not an alcoholic; I’m a drunk,” Lester says brightly. “An alcoholic drinks the same thing. A drunk drinks anything with alcohol in it. If it had alcohol, I’d drink it.”  Lester says he hasn’t done drugs “since ‘95.”
Lester’s penchant for getting blackout drunk and ‘raising hell’ in Santa Barbara wore thin on the authorities, the police and judicial system.
Santa Barbara has something called “Restorative Policing,” an inter-agency program -- police; courts; social services; health -- that helps chronically homeless individuals achieve self-sufficiency. Restorative Policing works with individuals to place them in detox, housing, or work programs.
“They didn’t want me in Santa Barbara,” Lester says of the Santa Barbara authorities.
It was through the Restorative Policing program that Lester was brought to Sunny Acres for the first time in August of 2017.  He went back to Santa Barbara for a short time in the fall to handle some “business,” and returned in December, 2017.
Today, Lester is thriving at Sunny Acres.
“Lester takes pride in the jobs we have given him at Sunny Acres,” says Sunny Acres program director, Johnny Rodriguez. “When the position of house manager was open and Lester volunteered to fill it, I gladly gave it to him. Lester is honest, fair, and respectful to all the men he is contact with on a daily basis, He finds peaceful resolutions to problems that sometimes arise. And he enforces the Sunny Acres program of work, meetings, and being accountable, keeping the place -- and ourselves -- clean and orderly.”
The respect is mutual between Johnny and Lester. “Working with Johnny has been great,” Lester says. “I earned his trust. We all have things to do here. No one has to be overbearing about it. Everybody gets along and we get things done.”
Lester plans on staying at Sunny Acres awhile.
“You have your freedom here,” Lester says.  “Good food. The open air. If you need something in town, Johnny’ll get it for ya; or get you to an appointment. You don’t have to do everything by yourself.
“This is a clean and sober house,” Lester says with a wide smile, missing a few teeth. “Anybody willing to work the program honestly can get on the right track. Johnny and Dan [DeVaul] gave me a chance, and it’s up to me not to disappointment them. I don’t intend to.”