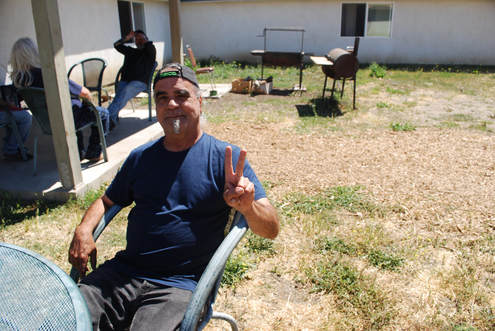 Sunny Acres agrees with Mike Gomez, Kitchen Manager for the community.
Looking at least a decade younger than his 67 years, Mike is a relaxed, and much valued fixture, on the Sunny Acres sober living ranch.
Born in Long Beach in 1950, Mike lived in Panama from the ages four to twelve. The family, seven kids(!) born to James and Helen, moved back to the states, to Montebello, California, in the early 1960s. Mike, a precocious kid, was the second oldest of the children, five boys, two girls. Mike’s father, James, worked for the Federal Aviation Administration (FAA).
Mike finished high school back in Panama, and stayed there from ages 18 to 20. A better-than-good guitarist, Mike played in a number of clubs with his band in Panama.

Moving back to the states, Mike started to “kind of calm down” in his twenties. He got married in 1977. The couple had a son and a daughter. The marriage ended in 1988.
Mike worked in mechanical drafting, making detailed drawings, constructing models of mechanical parts and devices, specifying design dimensions, preparing blueprints.  He designed kitchens, cabinets, all kinds of things.
Mike married again in 1991. The marriage produced no children and lasted until 1995.
For a change of pace, moved north to San Luis Obispo. “ I needed a change,” he says of the period after his second marriage..
“I always played the guitar,” Mike says. “In SLO, I did some drafting, worked for an architect. I also gave guitar lessons and repaired guitars.”
After awhile in SLO, Mike returned again to Southern California, to Orange County. Living in the city of Orange, Mike worked for Disneyland, of all places.  He worked on the rides to make them safer, including working on the Pirates of the Caribbean and Splash Mountain.
Ever moving, Mike went back up the state, this time to Paso Robles. There he got work as a mechanical draftsman at a well-known electrical component manufacturer.
It was in Paso Robles where the “shit hit the fan,” and Mike spent the next six-and-a-half years in prison. He divided his sentence between the Wasco, Tehachapi, and Mule Creek state prisons.
Paroled in December, 2017, the day after his release, Mike met with his parole officer, who told Mike, who had no place to go, that Sunny Acres was his only option.
“I had heard about the place,” Mike says today, “but I had no idea whatsoever what this place would be like.”
Mike remembers his introduction to Sunny Acres.
“I got in at six at night. It was pitch dark,” Mike recalls. “I wound up on the other side of the ranch. Dieter [another Sunny Acres resident] was selling Christmas Trees. I told him I was supposed to be here. Johnny and Dan were not around, so Dieter kind of got me set up. I just had a prison bag with my belongings, my worldly possessions.  And I was starving. I hadn’t eaten anything all day. I was scared, I don’t mind saying that. Someone brought me a plate of food. I was so grateful for that. I had no idea what was going to happen to me.”
Mike got to know the men at Sunny Acres. “Everyone was cool,” Mike says.
Still, it was a rough start for Mike. “I had no money, and I had to pay my own program fee. I didn’t want to be a burden to my family,” he says. “So, I worked the fields seven days a week, eight hours a day, clearing fields, throwing boulders and dirt.”
Mike’s introduction to Sunny Acres founder, Dan DeVaul, was memorable. “When I first came here, I tried to avoid Dan,” Mike laughs today. “I had heard the stories, that that he’d throw you out if saw you standing around. When I finally met him, he asked me some questions, about my story, how long I planned on staying. He said, at the end of that conversation, ‘I think you’re going to get along well here.’ And I get along fine with Dan. I like him. He’s a very interesting guy, and we’ve run a lot errands for Sunny Acres and we have great conversations.”
One day, early in 2018, the previous kitchen manager, J.J., asked Mike, “Do you cook?”  Mike said he did, and “J.J. hands me a knife and a bell pepper and tells me to cut it.” (Writer’s note: It’s all, evidently, in how you hold the knife.) Before going to jail, Mike was in a relationship where he did all the cooking.
Mike was working directly under JJ when JJ left the ranch in April. Mike moved to kitchen manager, head chef, of Sunny Acres. And by all accounts, the kitchen’s never been run better (or had better tasting food, according to survey of several residents.)
Says Sunny Acres Program director, Johnny Rodriguez, of Mike Gomez:
“Mike has stepped up to the plate and taken on a very challenging position as cook for Sunny Acres. As you can imagine, trying to satisfy so many different tastes and preferences that our guys present could be very trying for someone who wasn't up to the task. Mike is open to new ideas and suggestions that are given to him and he makes it work. Mike is consistent, and he shows up everyday, which I know from cooking for 20 years, is one of the challenges restaurants face. Mike provides consistently high quality work, and our food program is pretty damn good in my opinion.”
Like everyone at Sunny Acres, Mike has a lot of respect for Johnny Rodriguez in return.
“Johnny’s great,” Mike says. “You can talk to him. If I need things for the kitchen, he’s always been reasonable and quick about getting them. He treats everyone with respect and is fair with the guys. His is not an easy job, either.”
Mike’s got a small kitchen crew -- Gerald, Robert, Jesse -- for whom he clearly has great affection. “Jesse’s my little buddy,” Mike laughs.   “These guys are my good  friends. It has pleased me a great deal that these guys [the kitchen crew] trusted me. I trust these guys. That’s what Johnny’s done for me.”
Says Johnny: “They are men. I treat them like men. We respect each other. That’s why it works.”
Lester Rush, another good friend of Mike’s, is singled out for his contributions to Sunny Acres. Lester, the upbeat, good-natured house manager, Mike says, has been “instrumental in getting things organized. Lester’s done a really great job.”
“This is a thriving community here at Sunny Acres,” Mike says. “We are all working to be self-sufficient. And, all-in-all, it does work.”
And Mike does plan on staying awhile.