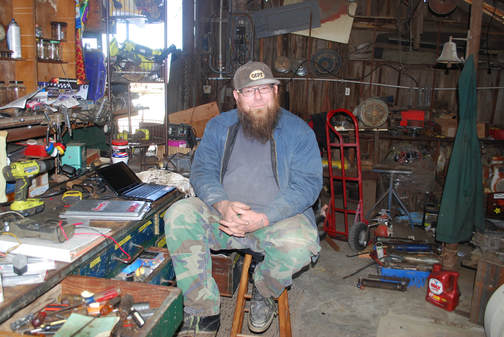 In talking to the men who live at the Sunny Acres sober living ranch, the word “trust” comes up a lot.

The men trust each other. They trust Johnny Rodriguez, the program director. They trust Dan DeVaul, Sunny Acres’ founder.

One person who has earned the trust and respect of DeVaul, Johnny, and the rest of the Sunny Acres community is Michael “Mike” Kracher (pronounced Crocker), the lead mechanic in DeVaul’s garage.

Born in Glendale, California, in 1976, Mike is the son of Allan and Edwina Kracher. Mike has one biological brother and sister, and two step-sisters. He was in the middle of those five children.

Edwina left Mike’s abusive father when Mike was ten. Allan, the father, was also physically and emotionally abusive to Mike.

“We could tell if my dad was in a bad mood by how the dog acted,” Mike says today, sitting in DeVaul’s garage/workshop. “Before my dad got to the front door, if the dog ran to the door, we knew dad was in a good mood. But if the dog ran away, we all scattered. It wasn’t going to be good.”

Edwina moved Mike and his brother and sister from Bell Gardens, California, to Oregon, to Texas, back to California, Los Angeles County, then up to Porterville, California, halfway between Fresno and Bakersfield in the Central Valley.

Porterville was home base for Mike. He dropped out of Monache High School in the 11th grade (later to earn his G.E.D.), Mike worked in two fields during his twenties: tile and car and boat mechanics.

He had plenty of work. Porterville is near Lake Success, a popular boating spot. There were plenty of boats and cars to work on. But it was in laying tile where Mike found his own lake of success.

Mike owned and operated DP Tile Co. for eight years. It was the little tile company that could succeed, so well that it landed a contract to tile every McDonald’s franchise in California. The contract was cancelled after some members of Mike’s crew stole tile that was designated for the huge McDonald’s job.  Mike lost the contract, his reputation, and soon after, his business.

Since his early teen years, Mike used methamphetamine; not heavily, but regularly. After losing his tile company, while still in his twenties, Mike’s meth use intensified. He began selling the stuff.

Selling and smoking meth, Mike was busted twice. He didn’t do time; instead, he avoided jail through drug and recovery courts. Finally, he got busted a third time, and was sentenced to prison.

Mike left prison in February of 2017. He went back to Porterville, landed a job, got a place to live. Then he got a call from his parole officer.

“You gotta move,” Officer Alevis said to Mike.  Alevis told him one of his only options was Sunny Acres. Mike had never heard of the place.

New Sunny Acres clients are screened by DeVaul and Johnny upon arrival.  During the interview, DeVaul asked Mike if he could work, if he had any particular skills.

“We got things for you to do,” DeVaul said. Working full-time is a requirement for the men at Sunny Acres. And skilled workers, like Mike, are highly valued.

Soon after laying tiles for the bathrooms and the Sunny Acres business office, where Johnny works, Mike was moved over to the garage to work on DeVaul’s beloved car collection.

Mike has worked well with the men at the Sunny Acres ranch.

“Mike he is willing to help others,” says program manager, Johnny Rodriguez, “and he is a guy who can mentor new guys that come in the program.”

“Johnny’s my best friend,” Mike says of Rodriguez. “He’s doing a good job. He takes the guys where they need to go for their appointments. He listens. He wants us to succeed.”

In the garage, Mike looks like a kid in a toy store. DeVaul has an eclectic collection of automobiles going back 100 years.  He’s got a still-elegant 1918, center-door Model T; a 1926 Ford Roadster Model T truck, ‘46 and ‘47 Fords, and many other beautiful relics. They run, too; thanks to Mike, they purr.  Even for a non-car guy, like this writer, the collection is amazing. DeVaul still drives the cars.

“Dan does give me a lot of responsibility,” Mike says looking around the garage. “I’ve never lied to him. I work hard.”

“This place [Sunny Acres] has its quirks,” Mike says, showing a visitor around DeVaul’s collection, “but if you do what you’re supposed to do, it works. I got my driver’s license back. I’ve saved some money. I’ve borrowed money, and paid it back. If you want to be sober, if you work hard, you can achieve that here.”