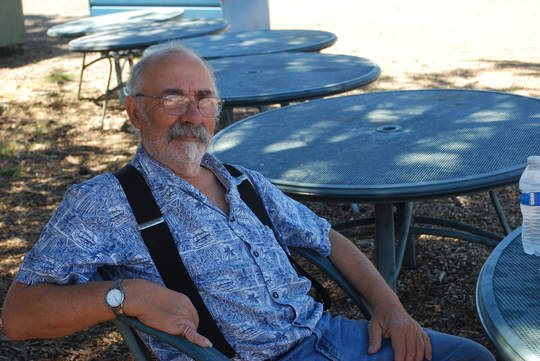 The person who has lived at the Sunny Acres sober living ranch longer than anyone, with the exception of founder Dan DeVaul, is 71 year old Samuel “Sammy” Vecchione, Jr.

Sammy was born in East Douglas, Massachusetts in 1947, the oldest of four children, to Samuel, Sr. and Lynn Vecchione.  There were three boys and one girl in the Vecchione household. Sam, Sr. worked as a chef and a carpenter. Lynn was a nurse at a hospital.

Sammy says he was a “geek” as a youth, but his description of himself makes him more hustler than geek, “I was more into making money,” he says with a twinkle.

Sammy graduated from Uxbridge High school in 1965. After high school, Sammy went to bartending school (“I haven’t had a drink in 40 years!”). He also earned an Associate’s Degree from Newbury College in business management. Newbury College is about three-and-a-half miles from Fenway Park.

In 1969, at the age of 22, Sammy got a job with Data General Corporation, based in Southborough, MA, in Worcester County.  Sammy rose quickly and became a managing supervisor, overseeing a workforce of more than 90 peopl.

During his years at Data General Corp., where Sammy worked from 1969 to 1987, he got married. The couple did not have any children. In 1987, Data General Corp. was moving to Colorado and gave Sammy a choice:  Move to Colorado, with a house, paid moving expenses, a car; Or, take a “mandatory layoff,” with a severance that included non-taken sick and holiday time. The total severance package added up to two-and-half years salary.

Sammy took the severance. In the meantime, Sammy’s marriage was not working out. He and his wife decided on a divorce, which, he proudly says, he paid very little.

“We divorced for $35 dollars,” Sammy smiles today.  “After I left Data Corp. my ex-wife and were still married and living together.  We went into to talk to the judge and he says to me, ‘You live here with her? And you want a divorce?  What are you waiting for?’ And I said, ‘A divorce.” And the judge said, ‘You got it.’”

The term “functional addict” is really a misnomer. What is meant by that term is that an addict/alcoholic is able to hold a job. That’s functioning only in one narrow sense. An addict isn’t functioning well at all, with or without a job.

Sammy was cocaine addict.  He smoked it in freebase form, an expensive, intense high.  He held on to his job, but Sammy was smoking his life away.

Sammy’s addiction was acute, and his father tried to get him some help. Sam, Sr. put Sammy in a California facility that cost more than $5,000 per month. The efficacy of the program was questionable, and the cost prohibitive, so Sammy left after a month.

Sam, Sr. asked DeVaul if Sammy might be able to rehab at Sunny Acres. DeVaul said yes. This was January 22, 2009.

“I tried it,” Sammy says. “I knew I could just jump on a plane and go back home. I thought, ‘What’s a couple of weeks?’ After one month, I thought it was easy. ”

There was plenty for Sammy to do on the ranch, and Sammy can do a whole bunch of things. He’s worked on electrical issues; he monitors the water; he is in charge of the food pick-up for the ranch. A large retail franchise donates food to Sunny Acres, and Sammy drives to pick it up.

Sammy also monitors and checks the water every day, does plumbing, and, until recently, ran the daily NA and AA meetings that are held on the ranch. He is, he says, “on-call” all the time.

It is hard to explain how or why Sunny Acres works. And it really isn’t necessary to explain.  Sammy’s got almost 10 years clean, and almost nine years without smoking cigarettes. That’s all you need to know about the place.

Maybe that’s all that needs to be said.